Home » REGIONS » Drakensberg » Kniphofia northiae in Lesotho panorama
Back to Category Overview
Total images in all categories: 11,036
Total number of hits on all images: 5,685,879 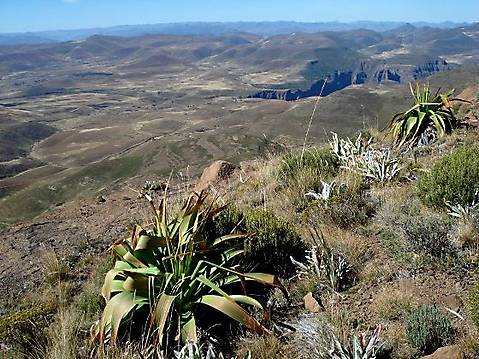 KwaZulu-Natal and the Drakensberg in particular are home to more than 35 Kniphofia species. The Kniphofia genus forms part of the same family as the aloes, viz. Asphodelaceae.

When not in flower, the broad-leaved poker or Kniphofia northiae may still be recognised by its broad, leathery leaves that have no keels. Inner leaves in the rosette are narrower. Leaves are up to 1 m long.

In flower the plant reaches heights around 1,7 m. The dense inflorescence has pinkish red buds and orange-red, yellow or whitish flowers, colours varying across the species distribution. The stamens are exserted. Flowering happens from before midspring and through summer.

The species is more widespread in the northeast of the Eastern Cape, confined to the southwest in KwaZulu-Natal. It also grows in Lesotho.

The robust plants are found on basalt cliffs, in montane grassland, along seepage lines, damp gullies and near streams. The species is not considered to be threatened in its habitat early in the twenty first century (Pooley, 1998; Trauseld, 1969; iNaturalist; http://redlist.sanbi.org).