Home » REGIONS » Drakensberg » Rhodohypoxis baurii var. baurii
Back to Category Overview
Total images in all categories: 11,036
Total number of hits on all images: 5,685,976 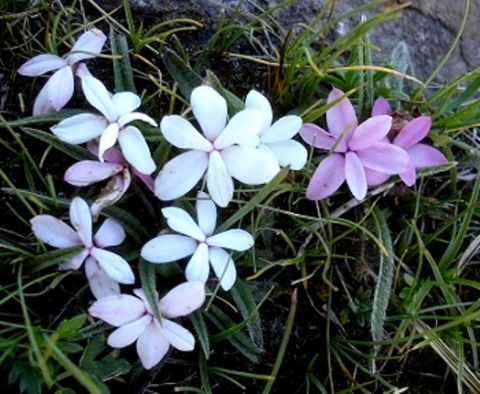 Rhodohypoxis baurii var. baurii, the red star, is a cormous perennial, a dwarf geophyte. The plant forms a matted ground covering by vegetative growth from stolons out of the corm.

The lanceolate leaves are narrow and grass-like, channelled and hairy. While the common name suggests red flowers, especially for R. baurii var. baurii, the star-shaped ones seen here show the other two colours that occur in R. baurii, viz. white and pink. The short corolla tube contains the anthers that reach two lengths.

Flowering happens in spring and summer. Black seeds are dispersed when the top half of the covering of the ripe capsule drops off.

The plant grows at high elevations in grassland of the Drakensberg on rock sheets where it is often damp. These flowers were photographed in the Mkhomazi Wilderness Area in January. All three recognised varieties of this species are considered not to be under threat in their respective habitats early in the twenty first century.

The plant hybridises among the varieties of its own species as well as with some Hypoxis species, a genus of the same family, the Hypoxidaceae or stargrass (Manning, 2009; iSpot; www.plantzafrica.com; http://redlist.sanbi.org).