Home » REGIONS » Drakensberg » Gomphostigma virgatum
Back to Category Overview
Total images in all categories: 11,018
Total number of hits on all images: 5,656,433 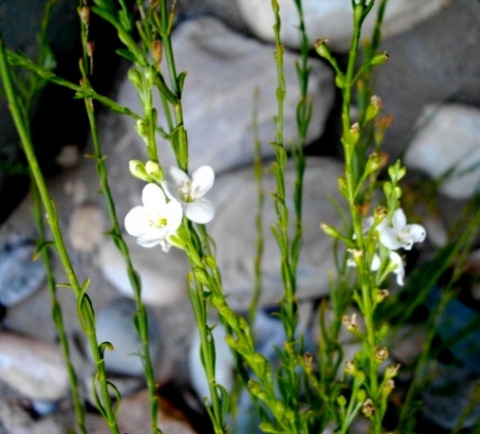 The wand-like flowering stems of this Gomphostigma virgatum plant show little foliage among the flowers. Leaves and stems are green on the plant in picture, unlike the silvery grey from a hairy covering also found on these shrubs.

The plants are often seen along rocky streambanks at elevations from high to low.

Normally the form of the specific epithet would be virgata to fit the feminine Latin form of Gomphostigma as some sources in the literature have it and not the neuter virgatum, but the originally published orthography of a name remains the official one, with very limited corrections being adopted (Vlok and Schutte-Vlok, 2010; Pooley, 1998; Manning, 2009; www.plantzafrica.com).