Home » REGIONS » Drakensberg » Gladiolus crassifolius and buzzing bees
Back to Category Overview
Total images in all categories: 12,068
Total number of hits on all images: 7,360,698 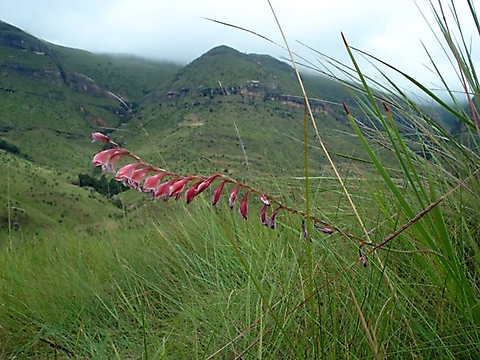 Stony grassland is often home to Gladiolus crassifolius. The plant's natural abode changes in appearance across subregions of its widespread distribution, ranging from the Eastern Cape to Angola, Malawi and Tanzania.

The higher elevations of the Drakensberg panorama add their remarkable plant mix of more than a hundred grass species and over a thousand flowering plants on extraordinary topography to the list of G. crassifolius neighbours. These slopes add a unique dimension to the concept of grassland, festooned in niches where numerous deciduous geophytes reside, including this cormous one.

People hiking across the open expanses with eyes peeled for unusual plants in the grass have every chance of discovering something rare, from an unknown grass to a bright flower. On some days they are dazzled by Drakensberg stalwarts flowering as if it is the most important task in the world. To each his own.

The long-tongued bees noted for servicing G. crassifolius flowers in the Drakensberg are often blue-banded bees, solitary species of the Amegilla genus.

These bees use the buzz pollination method of pollen gathering, also known as sonication. This means the bee grabs a flower and, while in stationary flight mode like a helicopter, it moves its flight muscles rapidly. This causes vibration of the flower, particularly the anthers. When "the right" frequency of vibration is reached, pollen becomes dislodged from ripe, open anthers onto the hairy hind legs of the bee.

This type of pollination prevents pollen wastage as it does not escape from the anthers when no bees are buzzing. It works on flowers bearing smooth-grained pollen in tubular anthers that open at one end only.

Besides Gladiolus, buzz pollination happens in many other genera, Solanum and Cyanella notable among them. About nine percent of the flowers on earth are primarily pollinated via buzz pollination.

Only some solitary bee species with blue-striped abdomens are capable of buzzing pollen out of anthers. Honeybees cannot do this. They have yellow-striped abdomens (Manning, 2009; Goldblatt and Manning, 1998; Wikipedia).