Home » REGIONS » Biedouw Valley » Ceroplesis aethiops flaunting its colours
Back to Category Overview
Total images in all categories: 11,528
Total number of hits on all images: 6,611,583 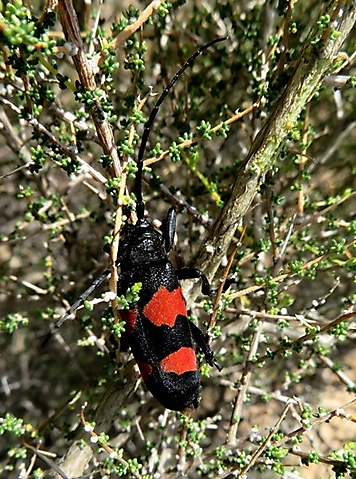 Previous
Image 3 of 50
Next

This Biedouw Valley resident was seen enjoying a quiet moment on a small-leaved shrub in spring sunshine. Believed to be a Ceroplesis aethiops, in Afrikaans a boktor (goat beetle), it is one of the solitary insect species belonging to the family Cerambycidae (subfamily Lamiinae).

These guys are known for the extended youth of many of its members. This comes about as the larvae eat tunnels in dry wood and consequently grow very slowly. There isn’t much nutrition in the wood, while the process must be quite laborious. So, the larva stage it is, sometimes for more than ten years.

Anything remotely edible will be consumed by something else on earth. If you read this, you are suitable food for something living now that simply hasn't found you yet.

Obscure insect species become noted, named and studied particularly when they cause damage to something that people use or value. The offending insect’s life cycle is checked for the opportune strategy of eradicating them. That comes from having a species around endowed with a brain.

Eating habits of some beetles cause the formation of galls in plant tissue. Chemicals secreted by the insect transform plant cells in such a way that it becomes food as well as home to the invading culprit. Galls may take the form of a plant’s own seed tissue, inappropriately appearing on stems or leaves; or merely as bulges on leaves.

Some innocuous beetles mimic poisonous counterparts from their neighbourhood, sometimes ones visibly armed with stings. This causes alarm in attackers, discouraging them. In this way the unarmed stay safe(r) through subterfuge, like the “armed response” or “beware of the dog” signs on garden gates.

Another remarkable insect defence mechanism: When captured, they will start a loud, rhythmic chirping noise. Such noises are rather similar across a number of insect species, recognised by their predators, mainly birds. The chirping resembles that of the birds’ own young in the nest when parents approach, causing them to regurgitate instantly whatever they have just swallowed.

The parent is conditioned to deposit its eaten food when seeing wide open children mouths and hearing their dinner bell chirping. When the still alive, recently swallowed insect chirps in the familiar way, it impacts on bird behaviour and the catch is released in a conditioned reflex action. This saves untold insect lives in last-ditch reprieves to the disgust of thwarted birds of many species.

The chirping Ceroplesis produces its sound mechanically by movement between central and back body parts; not quite Beatle music. The beetle in picture has lost an antenna, the remaining one longer than its body; the males having longer antennae than the females. Kidney-shaped eyes are positioned at the base of the antennae. The wings are relatively short. They are not mop-haired.

Those that have brightly coloured wings as the one in picture usually fly around by day. Red would serve no (mating?) purpose at night, while adding risk for insects sleeping during daytime (Holm, 2008; Wikipedia).