Home » REGIONS » Biedouw Valley » A Biedouw hill
Back to Category Overview
Total images in all categories: 11,506
Total number of hits on all images: 6,514,573 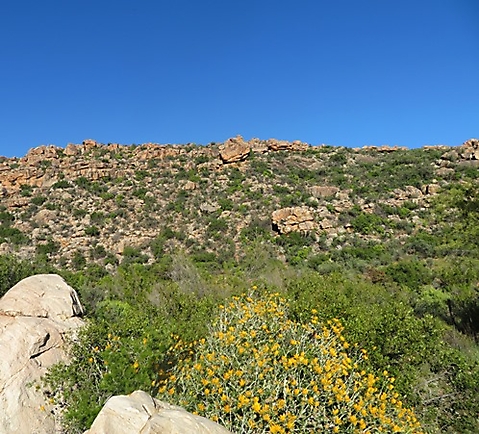 Rockiness preserves natural vegetation against development up to a point. Unless the farmer wants to live here, it may be too expensive and physically challenging for him or her to modify this scene. The challenge could, of course, always be delegated to livestock, particularly goats in larger numbers than the carrying capacity of the particular veld.

Once the urban sprawl reaches such a place, the possibilities for destruction escalate dramatically. Imagine how many stands a housing developer could fit in here. The smaller the stands the bigger the revenue for the municipality to come. Let's hope no city is ever built in or near the Biedouw, but who knows? Like a swimming pool, the future has a deep end.

Beauty is in the eye of the beholder. The eye pleased by tiled roofs upon bricks and mortar over natural bush in places like this has a progress focused brain. It either thinks money or people as the solitary significant species on earth.

There must, of course, be balance in the pursuit of human and other needs. But long-ago nature always won such arguments over the small, scattered human settlements battling for survival and no alarm was caused. Since the Industrial Revolution a series of tipping points have been reached in human impact on earth, until nature’s diversity now needs protection from its own, rampant, dominator species.

It will all be sorted out in due course, no worries! A smooth settlement is possible, because people have brains. If those brains fail collectively in dealing with this, the solution could arrive via a big extinction. Such cataclysmic events happened on earth many times in the past with variable impact.

This is then followed by evolution among the residual species, for life is resilient. Most cataclysms don't hit all species equally hard. As in the case of wars, it is not about who is right, always about who is left. People, or something like them, could well be part of such a new cycle if it comes, but not necessarily.

Evolution among the living never backs away while there is any life left. Temples and pyramids are temporary, just like coral reefs. And what is to come?