Home » REGIONS » Biedouw Valley » Convolvulus capensis and worm
Back to Category Overview
Total images in all categories: 11,542
Total number of hits on all images: 6,625,902 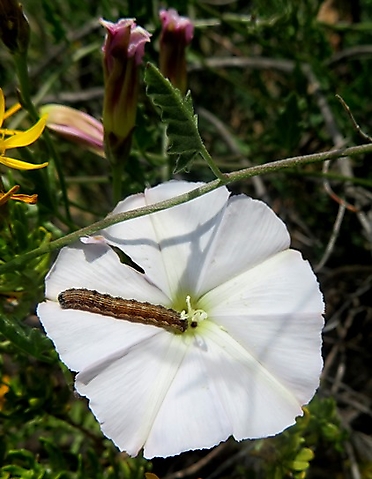 Previous
Image 4 of 50
Next

More damage to the Convolvulus capensis corolla can be expected before this visitor, not in a life stage promising pollination, is likely to depart. An extended repose in this exposed situation could cost the intruder dearly though, becoming food to something higher up in the food chain and saving the day for the flower.

Purplish, furled buds show what these flowers look like before opening, calyces short around corolla bases.

The back view of a leaf is also on show: the midrib prominent, the lance-shaped leaf narrow and erect, dully dark green with spaced lateral veins to the wavy margins. The leaf is long-stalked on a faintly, short-haired stem with long internodes between the alternate leaves (Vlok and Schutte-Vlok, 2015; Manning, 2007; iNaturalist).