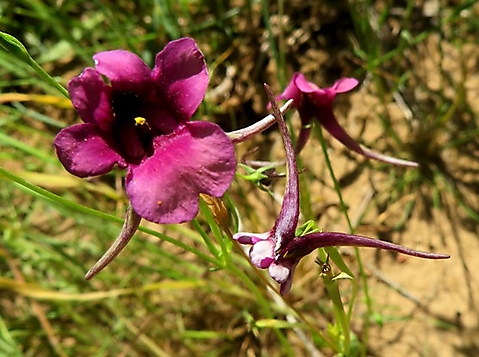 Like longhorn cattle (or cartwheeling clowns), the Diascia whiteheadii flowers bear paired spurs of about 2 cm long that curve out dramatically. These flowers produce oils of value to bees called Rediviva longimanus that have developed front legs long enough to reach right into the bottom of these flower spurs.

Like the chicken and egg riddle one may well ask what came first, the long spur or the long bee legs? There were no people around to report the relevant truth at the time, but scientific theory has it that the insect legs “became longer” to reach the oil better.

But no actual legs were ever stretched for achieving this! Those bees born with longer legs could feed their babies better, so the “right” long-leg genes were reproduced more regularly as the short-legged ones tended to die out. Or they may have found other solutions involving other flowers, becoming something else and earning other Latin names that they too would never know (Manning, 2007; Manning and Goldblatt, 1997; iNaturalist).