Home » PARKS AND GARDENS » Caledon Wildflower Garden » Leucospermum truncatulum changing colour and texture
Back to Category Overview
Total images in all categories: 9,573
Total number of hits on all images: 4,302,162 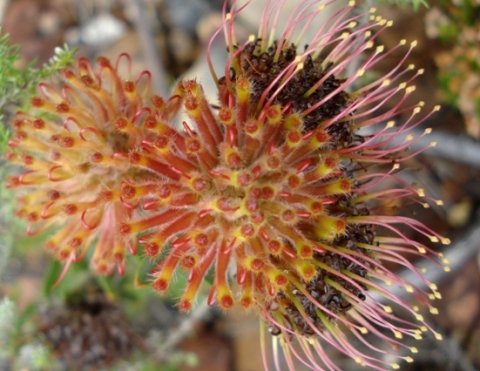 Previous
Image 9 of 17
Next

The old and the new juxtaposed in a stem-tip cluster is typical of Leucospermum truncatulum flowering.

This inflorescence seen in the Caledon Wildflower Garden has (on the left) hairy buds like red-tipped covering socks, busy releasing shiny styles curled back because the stigmas, now still pollen presenters, are for the time being stuck inside where pollen is being deposited upon their sticky surfaces.

When this is done, the slit between two perianth segments will open wider, allowing them to whip up, springing into erect positions for painting pollen onto visitors.

To the right this vital process has been completed. The perianths have receded into the dark basal mass, the styles stiffly erect. The has-been pollen presenters now functioning as stigmas, are doing their feminine duty of receiving their own pollen consignments from elsewhere for fertilisation and seed (Matthews and Carter, 1993).