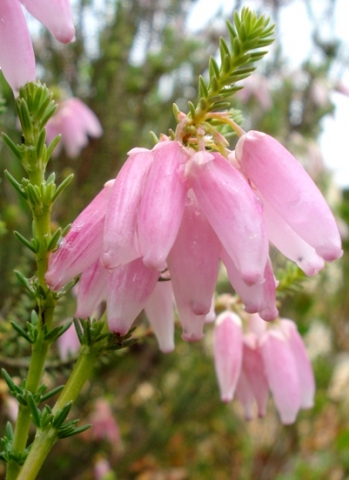 The leaves of Erica bauera are small and narrow. They ascend, spread or sag in groups of four (4-nate) around the stems, sometimes harbouring smaller leaves in their axils. The leaf whorls may be spaced, showing long internodes or morphing into a somewhat imbricate arrangement as seen above the flowers in picture. The leaves here are oblong to narrowly lanceolate, blue-green in colour. They may also be recurving and grey-green.

This pale pink flowering plant, the corollas uniformly coloured, was photographed in November in the Caledon Wildflower Garden where the species thrives far to the west of its natural distribution area (Baker and Oliver, 1967; Bond and Goldblatt, 1984).