Home » PARKS AND GARDENS » Caledon Wildflower Garden » Crassula ovata stems
Back to Category Overview
Total images in all categories: 12,061
Total number of hits on all images: 7,359,565 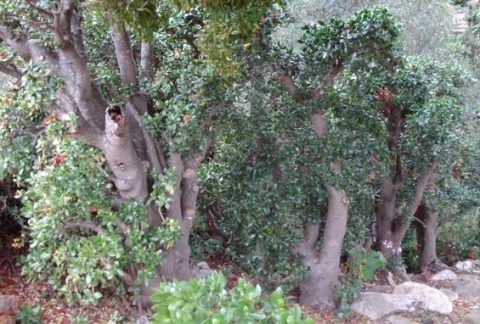 These mature Crassula ovata stems were seen in the Caledon Wildflower Garden during October after the flowering season. C. ovata stems may reach a diameter of 20 cm. They are fairly smooth on the specimens shown, but may sometimes be gnarled; their colour usually brown, grey or somewhere in between.

C. ovata is commonly known as the jade plant or in Afrikaans as kerkei, a name inherited from the Khoi language now lost in South Africa. Khoi and San indigenous tribes used the combustible dry remains of the stems of this plant (as well as stem husks of some Monsonia species, sometimes called Bushman candles) as torches for short-term use in the dark or to light a new fire.

Ironically, C. ovata and some other robustly growing succulents are also grown in dense, low hedges to keep fire out; a function successfully performed by the highly succulent live stems and leaves (Vlok and Schutte-Vlok, 2010; Smith and Crouch, 2009; iSpot; www.plantzafrica.com).