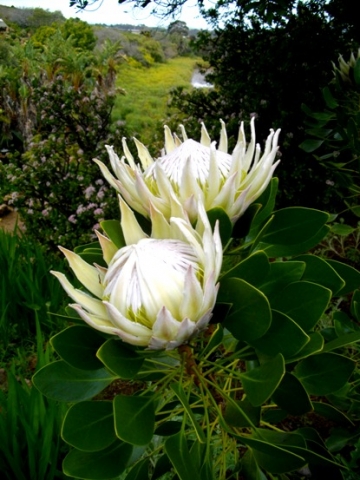 This creamy white form of Protea cynaroides was photographed in the Caledon Wildflower Garden. The photo was taken in July. This garden is well worth visiting.

The white or actually creamy green form of the king protea has been seen growing in nature in the Kogelberg, but may occur elsewhere as well.

Note the straightness in the foliage, quite unlike the wavy leaf appearance generally seen. The angularity in the margins of the upper bracts of the flowerheads is also noteworthy.

Flowering time for P. cynaroides varies according to region. There are forms flowering in each of the four seasons and retain this attribute of differing flowering times depending on their origin when transplanted together. Mary Vogts is reported to have distinguished as many as eighty variants of P. cynaroides in terms of morphology, colour and flowering times; truly a protean plant. All of this offers much to horticulture (Rourke, 1980).