Home » TYPES » Mesembs » Scopelogena verruculata
Back to Category Overview
Total images in all categories: 11,239
Total number of hits on all images: 5,948,358 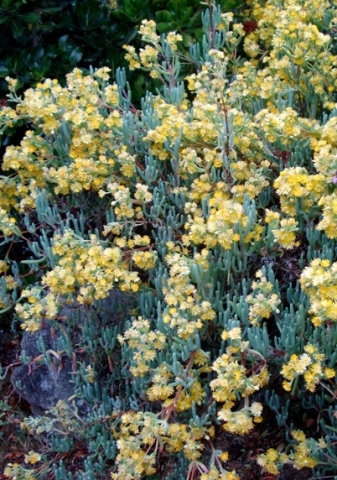 Scopelogena verruculata and previously Scopelogena gracilis is a compact succulent shrublet that grows to 25 cm. This yellow-flowering mesemb found in the Caledon Wildflower Garden may be S. verruculata, although the identification is uncertain.

The Greek words scopelos meaning stone or rock and genos meaning descendant are combined in the generic name that indicates the habitat of a Scopelogena plant: child of the rock.

The plant is distributed in the southern Cape in an area that includes Riversdale and Swellendam. The habitat of the species is described as stony slopes and sandstone cliffs in porous, slightly acidic soils. The species is not considered to be threatened in its habitat early in the twenty first century.

The genus of Scopelogena has only two species, the other one being S. bruynsii. The genus is grouped with Lampranthus-like shrubby mesembs; the Lampranthus link is strong as the plants used to be included in that genus (Smith, et al, 1998; Bond and Goldblatt, 1984; http://redlist.sanbi.org).