Home » TYPES » Mesembs » Schlechteranthus hallii fruit capsule
Back to Category Overview
Total images in all categories: 11,238
Total number of hits on all images: 5,948,222 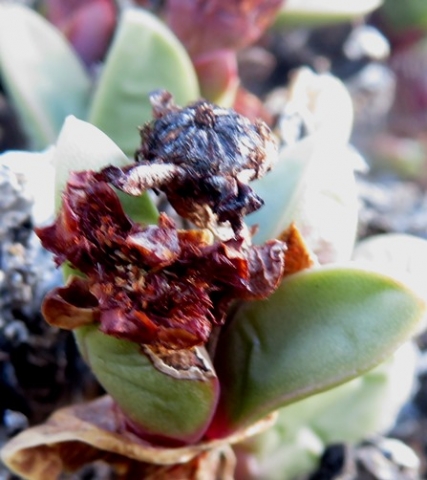 The small fruit capsule of Schlechteranthus hallii is rounded at its base, flatly dome-shaped on top; resembling those of Leipoldtia species.

The variable covering membranes or locule roofs are recurving at their margins. There are spur-like processes partly covering the locule mouths, obstructing the exit for seeds. The expanding keels on these capsules diverge towards their pointed tips. A capsule has eleven or twelve locules. The reddish yellow seed has a flattened pear-shape, its surface rough.

The flowers of S. hallii are pinkish purple, pale pink in the centre. Flowers grow solitary on short stalks with six sepals of unequal shape and size, subtended by two pairs of fleshy bracts.

The petals grow in two or three rows, spreading around the flower centre; the outer ones lax, the inner ones angled higher. The corolla diameter is about 17 mm.

The bearded stamens form an erect column in the flower centre where they are surrounded by staminodes, i.e. filaments that are sterile as they have no anthers.