Home » TYPES » Mesembs » Stoeberia frutescens
Back to Category Overview
Total images in all categories: 11,104
Total number of hits on all images: 5,772,119 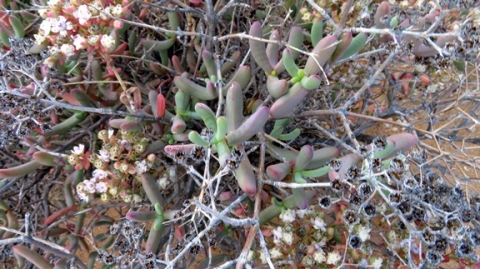 Stoeberia frutescens, in Afrikaans commonly the donkievy (donkey fig), is a spreading shrub reaching 75 cm in height. Scientifically the plant had different names in the past, including Ruschia frutescens and Mesembryanthemum frutescens respectively.

The species is distributed from the Knersvlakte through Namaqualand and the Richtersveld to southern Namibia.

The plant’s habitat includes both the sandy coastal plain, often on the low, broad termite-created “heuweltjies” and the klipkoppe, Namaqualand’s granite hills. This plant is one of the pioneer species of the region, settling early in disturbed places. S. frutescens is not considered to be threatened in its habitat early in the twenty first century (Le Roux, et al, 2005; Smith, et al, 1998; Herre, 1971; iNaturalist; http://redlist.sanbi.org).