Home » TYPES » Mesembs » Tanquana prismatica
Back to Category Overview
Total images in all categories: 11,104
Total number of hits on all images: 5,772,093 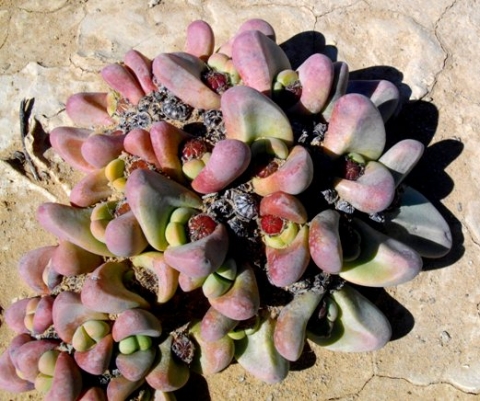 Tanquana prismatica is a spreading, clump-forming leaf succulent bearing leaves of variable shape and size; in picture of variable colour as well. This genus of three species was split from Pleiospilos because of Tanquana leaves lacking the keels found on Pleiospilos leaves, as well as differences in the fruit capsules.

The generic name is derived from the Tanqua Karoo, the arid land of stony hills and plains surrounded by the towns of Ceres, Sutherland and Calvinia, an inland region in the Western Cape (and slightly into the Northern Cape) where these plants grow. The lowly shrub vegetation found here, the karoobossies, does provide shelter for some small, sun-shy succulents of this part of the Succulent Karoo, but the Tanquana species thrive in full sun. The soil in this region is derived from Dwyka tillite and Ecca shales.

T. prismatica is not considered to be threatened in its habitat early in the twenty first century, but its two relatives, T. hilmarii and T. archeri, both more restricted in distribution, are critically endangered and vulnerable respectively (Van Jaarsveld, et al, 2006; Smith, et al, 1998; Herre, 1971; iSpot; www.bidorbuy.co.za; http://redlist.sanbi.org).