Home » REGIONS » Karoo » You won't believe how much this place has changed!
Back to Category Overview
Total images in all categories: 11,528
Total number of hits on all images: 6,611,421

You won't believe how much this place has changed! 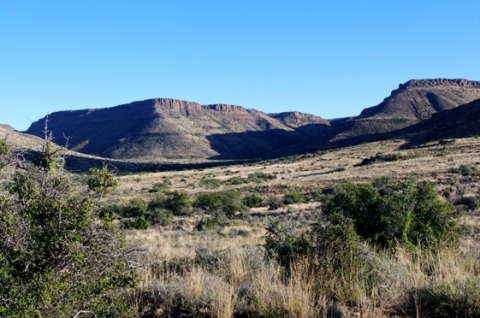 There was a period around 260 million years ago in a part of Gondwanaland that became South Africa... later, after the Great Ice Age, when temperate forests flourished. Some inland regions beyond the northern shores of what was once the inland Karoo sea were covered in forest. Some of these forests became the coal beds mined these days in the northeastern parts of the country.

The Karoo sea to the south was there for a very long time, for millions of years but this was also very long ago. Today this is semi-desert, totally unlike most sea regions. At other times there were kilometres high shale and sandstone sediments that accumulated in the Karoo Basin. At some stage these sediments ranged from what are today Mpumalanga to the Swartberg Mountains north of the Little Karoo.

The Karoo in its Gondwanaland days drifted southwards during an extended geographical period of slow change, acquiring an ice covering from proximity to the polar region. At other times Gondwanaland drifted north again, the Karoo riding along in the middle of it. Hitting warmer zones made the ice disappear, leaving glacial till, i.e. angular, unweathered rocky material including pebbles, stones and boulders on the land.

Some of the large-scale sediments originated from the tectonically active mountain ranges to the south, other components came from highlands to the east. Much of this land also (later) became covered by Drakensberg lava, but that also disappeared again.

Erosion over millions of years left the harder, durable parts in today's landscape for us to see as ridged hills and valleys, from which much was swept away over time, gone to the sea and wherever.

Should there have been any interested observers in those days, all of these calamitous events and movements might have gone unnoticed and pretty uneventful, as it took so much time in the making, slowly measured in umpteen millions of years. The observers would have watched, pretty bored like security guards in honest countries where nothing happens many times per minute. Stable and serene, the Karoo is still like that to this day, but appreciated by its residents.

And all that stuff actually happened! The earth’s dance tempo is much too slow for living creatures to notice, let alone pick up the rhythm (Norman and Whitfield, 2006; Wikipedia).