Home » REGIONS » Karoo » Southern rock agama
Back to Category Overview
Total images in all categories: 12,068
Total number of hits on all images: 7,363,275 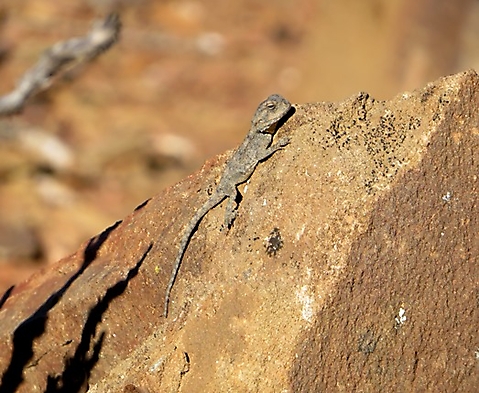 Agama atra, the southern rock agama, is a sociable lizard quite active in daytime. It lives in small colonies on rocky outcrops and found widespread in southern Africa. The Afrikaans name bloukopklipsalmander (blue head stone salamander) may refer to this species or to one or several of the other South African agamas.

A narrow, crest is present along the back of the animal that becomes up to 25 cm long. The dumpy body ends in a longish, thin tail. The shape of the head is somewhat triangular, the male’s head turning bright blue in the breeding season.

This is the one often spotted sitting prominently positioned on a rock, as if part of it, or frozen stiff. When danger is perceived, it darts away, too fast for a photo and hides until the coast is clear; the photographer departing in frustration. Females and young agamas are generally warier.

These lizards eat small insects like ants and termites. They are in turn eaten by fiscal shrikes, snakes, some raptors and these days also by domestic cats.

For whatever lives on earth, eats something else that lives, while serving as food to yet other members of the interconnected, natural society. The eaten is usually smaller or weaker than the eater, although once anything dies, all the hungry might capitalise on opportunity. All participants fit somewhere into complex chains and matrices of the eaters and the eaten of earth.

The smile is a sublimated reminder of this fact. Other acts involving the baring of the teeth explain this more clearly. Agamas don’t smile, but lizards or some lizards have acrodont teeth attached on the top surface of the jaw bone as in fish and amphibians (Wikipedia; www.iaszoology.com).