Home » REGIONS » Karoo » Nature's notice board
Back to Category Overview
Total images in all categories: 12,068
Total number of hits on all images: 7,363,233 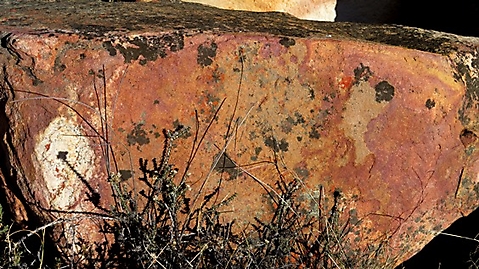 Try to find your message among the many posted here! A potpourri of languages conveys dispatches, strange and dissimilar, intended for earthling species of all sorts. The South African veld, also the arid and sometimes shunned interior, is replete with rock that is art untouched by human hand. Artists like Dirk Meerkotter drew inspiration from natural textures such as this.

The eyes of random visitors peer at this rockface from sockets surrounded by hairs, feathers or scales, while the majority of eyes look from naked exoskeletons, the viewers insects. And there are even others!

Once spotted, the appropriate message is in many cases absorbed and interpreted instantly. Grammar in the staying alive languages of most species is cryptic, the physical endowment for voice enablement variously restricted. Every particular communication system is learnt in a hard school of survival, where failure is fatal and teachers had never been to college.

Lingering by a natural notice board of the veld is often unsafe, usually an immobile act of observation while deliberately trying to remain unseen. The aim is always to spot important items in time. Important here includes firstly life-threatening danger, in time translated to sufficient for escape velocity to exceed attack velocity. Secondly, it is important to spot other viewers of the edible kind. Mouth-watering in a myriad of specific ways of ingesting food, choices from virtual or hypothetical menus and styles of relishing, particular to each species, the range of eating modes across species is huge. Thirdly there is the importance of regularly enough spotting matable parties of the own kind.

All of the veld is actually one big noticeboard used by all residents for life-supporting messages, including where to sleep. In a world of bricks and mortar, signs and written notes are posted in expected, obvious places in terms of people behaviour, clearly marked and hardly missed. (The can-do type rarely admits errors.) In the natural world of all species sharing, almost everything is to be read as a message, using diverse sensory organs according to the natural endowment of each species.

A rock like this is a special case of the natural world, resembling the notice boards used by people. It therefore becomes an interface for humans with the communication systems of untold fellow citizens of the earth. Such an interface where otherwise unconnected entities meet, is worthy of a moment’s contemplation.

This is an interspecies broadcasting centre, linking endless specific social worlds sharing space. Not only colours and shapes of the human eye’s limited range are posted. And users also communicate via smell, texture, taste, vibrations or features accommodating yet lesser-known media of messaging. They interact here in ways beyond the ken of people, or rarely considered by people.

Human body language for instance explains something about communication capacity extension in social contexts beyond the spoken word. Among all species the use of the eyes, bulging of muscles, raising of hairs or feathers, showing of teeth, touch involving all sorts of body parts and extremities, breathing variation, grunting, growling, chirping or keening that may be ultra-linguistic or not, temperature and colour modifications, fluid secretions and many more actions, constitute the enormously rich communication range and variability in the zoological world, featuring in behaviour also related to procreation.

This stone tells of a communication challenge at another level. Of another United Nations still to be established on earth, if we have the courage to cope with the ethical implications that will arise if and when we talk to all that we eat.

For why do we spend so heavily on resources like radio telescopes for receiving messages from far-off planets possibly inhabited by advanced insect-like existences, if we don’t also endeavour mastering communication with at least the higher animals sharing our earth? Or do we fear the competition of beings closest to us in development, like the other species of the genus Homo that we eradicated so many aeons ago?