Home » REGIONS » Karoo » Pleiospilos bolusii
Back to Category Overview
Total images in all categories: 11,541
Total number of hits on all images: 6,625,896 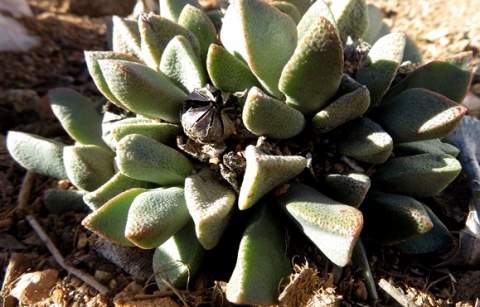 Pleiospilos bolusii is one of the Karoo succulents that one may miss due to its size but more because of its blending into the stony surroundings of its habitat.

Another reason for this plant being elusive is its vulnerable survival status in habitat. It is not the natural harshness of the climate but the manmade threats, including overgrazing by livestock, illegal plant collections from nature and sometimes mining that is hammering vulnerable species like this one.

Global warming is expected to reduce plant and animal species numbers in many places on earth, even in the near future, while in some cases this has started already. Losses are expected even if the average temperature rises by only one or two degrees.

How accurately the average temperature of the earth is measured or can be measured is questionable but this does not make the problem disappear.

The gaps in scientific knowledge lead to debates and excuses as confusing and long-ranging as the traditional theological ones of earlier times. And gaps will be taken by fast entrepreneurs, politicians and other beneficiaries capitalising vir oulaas on the demise of nature (Frandsen, 2017; Smith, et al, 1998; Gledhill, 1981; Herre, 1971).

There is more on this plant elsewhere on this Site, accessible via the Search Box.

Vir oulaas is Afrikaans for: for the last time.