Home » REGIONS » Karoo » Stapelia flavopurpurea flower centre
Back to Category Overview
Total images in all categories: 11,544
Total number of hits on all images: 6,625,939 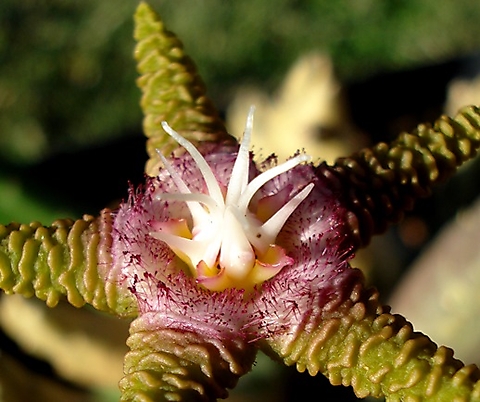 Stapelia flavopurpurea of the northern Karoo is one of only few stapelias that are not foul-smelling. It has a faint, sweet fragrance resembling liquorice or honey.

The specific (Latin) name, flavopurpurea, means yellow-purple, usually appropriate, unless the five spreading lobes (occasionally) tend towards green. The lobe surfaces remind of dinosaur skin. Or the idea of it? Maybe there has never been a dinosaur with exactly such a skin.

The plant’s stems are green or purple, erect and square in the well-known stapeliad fashion. The flower, not much over 3 cm across, is distinctive of Stapelia in shape, of S. flavopurpurea in colour.

The purple hairs on the inner, white part of the corolla, around the two erect central coronas, are notably club-shaped. Imagine having to comb or brush your club-shaped hair (White and Sloane, 1937; Frandsen, 2017; iNaturalist; http://www.llifle.com).