Home » TYPES » Herbs » Lyperia tristis dancing flowers
Back to Category Overview
Total images in all categories: 12,086
Total number of hits on all images: 7,381,001 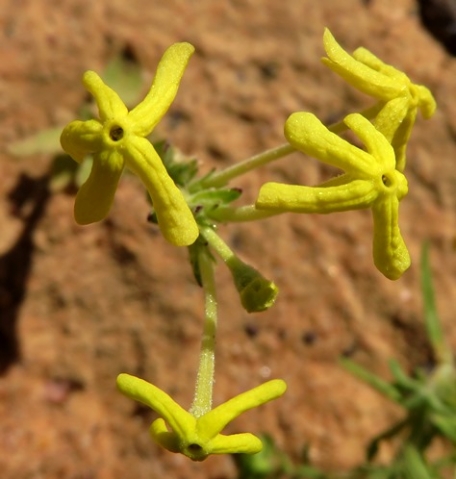 The long-limbed corollas of Lyperia tristis appear like yellow-attired clowns performing cart-wheel type clownery for children rather than looking their best to attract pollinators. There is a dark, round mouth in the flower centre that will do as a clown bellybutton.

The oblong petal lobes have smaller oblongs or raised ridges in their central parts. The long, cylindrical corolla tube is pale cream, appearing both hairy and covered in glistening surface cells.

Moths, probably ones with long tongues, visit these flowers in the dark for the nectar and achieve more than a casual drink (Vlok and Schutte-Vlok, 2015; Manning, 2007; Leistner, (Ed.), 2000; iNaturalist).