Home » TYPES » Herbs » Lyperia tristis stem-leaves
Back to Category Overview
Total images in all categories: 11,905
Total number of hits on all images: 7,155,743 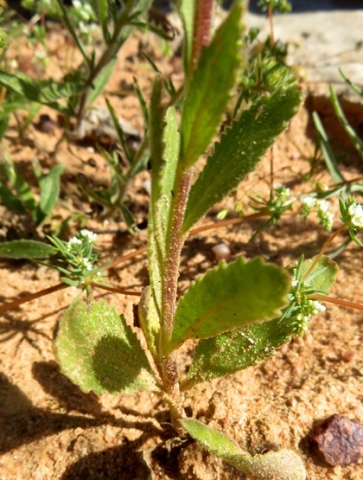 The leaves and stems of Lyperia tristis are sandy in the photo, probably from the plant’s glandular hairs that allow wind deposits of the grains to stick. The ascending, alternate leaves have strongly serrated margins. There isn’t clumping of leaves at the stem-base on this plant.

The erect, reddish stem is thick but soft, as expected in an annual sprouting from winter rain in the sandy soil. The photo was taken near the Maskam Mountain close to Vanrhynsdorp (Vlok and Schutte-Vlok, 2015; Manning, 2007; Leistner, (Ed.), 2000; iNaturalist).