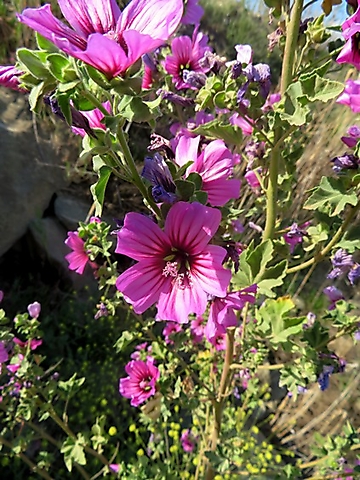 Malva arborea, the tree mallow and in Afrikaans the mak kiesieblaar (tame kiesie leaf), earlier scientifically Malva eriocalyx and Lavatera arborea respectively at different times, is a naturalised exotic from the Mediterranean region and western Europe. The photo was taken at a roadside by a small stream near Barrydale.

The sparsely branched, erect annual, biennial or perennial reaches heights from 50 cm to 2 m. The habitat is mainly coastal and near watercourses.

The plant belongs to the Malvaceae or hibiscus family. About six other Malva species are also naturalised in the country, notably the kiesieblaar or M. parviflora, a common weed (Leistner, (Ed.), 2000; Wikipedia; iNaturalist; http://redlist.sanbi.org).