Home » TYPES » Herbs » Lysimachia arvensis var. caerulea
Back to Category Overview
Total images in all categories: 11,792
Total number of hits on all images: 6,949,134 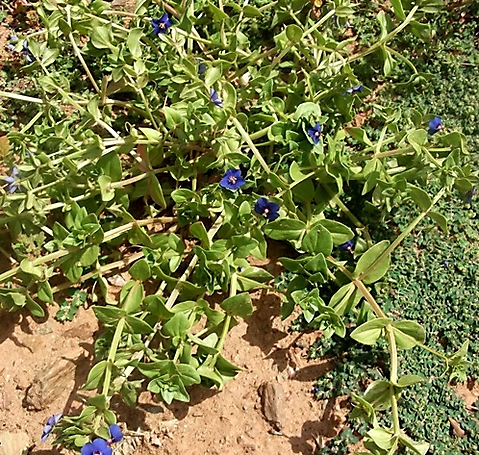 Lysimachia arvensis var. caerulea, commonly known as the scarlet pimpernel or the poor-man's-weatherglass, in Afrikaans as the blouselblommetjie (little blue flower) and previously scientifically as Anagallis arvensis, is an exotic annual growing weak, sprawling, winged stems reaching lengths of up to 40 cm.

The opposite leaves are sessile and soft with tiny glands on the lower surfaces. They are from 5 mm to 20 mm long and from 5 mm to 15 mm wide.

The five-petalled, actinomorphic flowers are bright blue, pink, orange or red. Flowering happens from late winter to after midspring, prolifically after fire.

The plant is found widespread on disturbed ground in South Africa and worldwide in temperate regions, a weed in damp areas. References were found for the plant occurring in the Western Cape, the Eastern Cape and KwaZulu-Natal. It originated in Europe, western Asia and north Africa.