Home » TYPES » Herbs » Lyperia tristis last flowers
Back to Category Overview
Total images in all categories: 11,632
Total number of hits on all images: 6,749,688 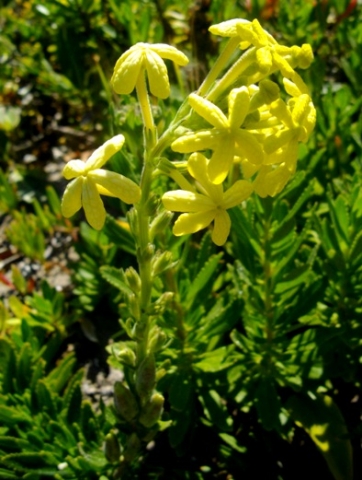 This Lyperia tristis plant was found flowering near the sea at Vermont during October. Toothed margins on the ascending ovate leaves are visible low down on the plant.

The raceme is nearing the end of its season; low down, the small green calyces of flowers that have lost their corollas can be seen in the leaf axils.

The five spreading petal lobes on the long cylindrical corolla tube have uneven surfaces from indentations along the veins. The corolla colour in this case is pale yellow. Fine hairiness occurs on the outside of the thin, straight tubes. The flower mouth is small, showing nothing of style and stamens to be reached by pollinator tongues (Manning, 2007).