Home » TYPES » Herbs » Cyperus cyperoides subsp. cyperoides
Back to Category Overview
Total images in all categories: 12,082
Total number of hits on all images: 7,379,593 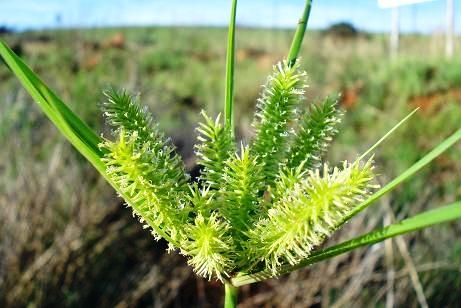 Cyperus cyperoides subsp. cyperoides is a perennial growing from a thick, rhizomatous base. The species used to form part of the Mariscus genus, known as Mariscus sumatrensis and M. nossibeensis at different times.

It occurs in the Eastern Cape, KwaZulu-Natal, Mpumalanga and Limpopo, as well as in some southern African countries. The habitat is damp grassland. The subspecies is not considered to be threatened in its habitat early in the twenty first century.

Cyperus is a genus of grass-like rhizomatous herbs. They often occur in marshy conditions. Humans are sometimes allergic to the pollen of some Cyperus species (Onderstall, 1996; iNaturalist; http://redlist.sanbi.org).