Home » TYPES » Herbs » Dianthus bolusii
Back to Category Overview
Total images in all categories: 11,779
Total number of hits on all images: 6,931,946 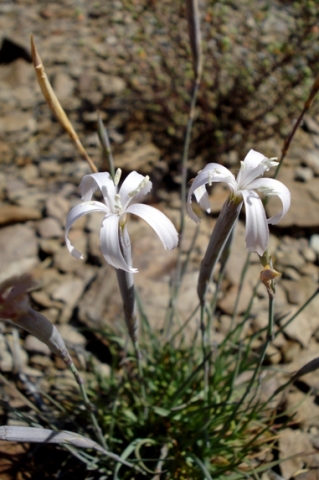 Dianthus bolusii, commonly known as wild pink or in Afrikaans as bergangelier (mountain carnation), is a tufted perennial reaching heights from 10 cm to 40 cm.

The leaves are hairless, narrow and blue-grey in colour. Joined in opposite pairs at the base in a short sheath, the leaves are grass-like, clustered near the ground. Leaf dimensions are 5 cm long and 3 mm wide.

The distribution of this South African endemic lies mainly in the Western Cape, spreading into the Northern Cape and Eastern Cape. The plant in picture was seen in the Little Karoo. It normally grows in sandy soil on rocky outcrops, mainly in fynbos. The species is not considered to be threatened in its habitat early in the twenty first century (Vlok and Schutte-Vlok, 2010; iSpot; www.redlist.sanbi.org).