Home » TYPES » Herbs » Cynoglossum hispidum flower
Back to Category Overview
Total images in all categories: 12,082
Total number of hits on all images: 7,379,716 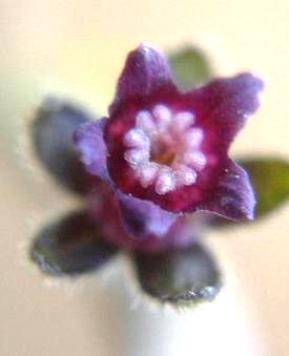 Cynoglossum hispidum, commonly known as hound's tongue, is a biennial or perennial herb that may exceed 50 cm in height. The basal leaves are stalked, while those higher up are sessile. Leaves are variable in size, elliptic in shape and covered in coarse, sparsely distributed hairs.

The branched inflorescences at branch tips comprise many small, reddish-purple flowers. The corolla has swollen appendages at the mouth. The stamens are inside the tube. Flowering happens in spring.

The species distribution in South Africa is wide, covering all provinces apart from (possibly) the Northern Cape. The plant's habitat is open grassland and marshes. The species is not considered to be threatened in its habitat early in the twenty first century.

The red or orange fruit are eaten by birds and monkeys (Van Wyk and Malan, 1997; http://redlist.sanbi.org).