Home » HABITAT » Mountains » Remoteness serves biodiversity
Back to Category Overview
Total images in all categories: 11,544
Total number of hits on all images: 6,625,972 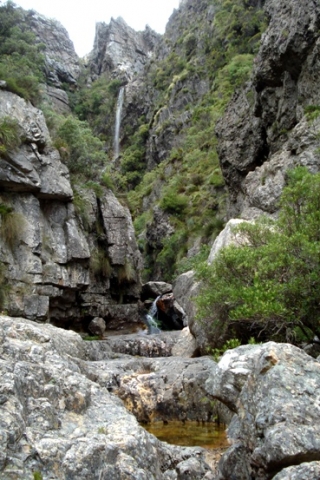 Although many people climb mountains, gravity holds danger that forces them onto traversable routes, the majority of them onto few, safe routes due to limited mountaineering capabilities. Even the masters of rope climbing heed features like brittle rock and other dangers, leaving some people-free areas along the slopes.

Inaccessible colonies thriving in their safe places may, of course, continue to produce seed undisturbedly, until enough of it has spread to announce their existence to the novelty seekers. This is the ideal scenario for once the representation of a species grows stronger.

Faraway deserts function in the same way. They are these days intrusively traversed in competitive haste by fast car drivers of events such as the Dakar Rally, all the people seeking T-shirts for having done everything way-out once. Prior to this, large tracts of so-called empty land was for thousands of years only crossed rarely and much more leisurely by patient people on camels or on foot.

Few of the hasty (or patient) ones care, are even aware of rare plants hiding in the nooks and crannies they pass by. May all such travellers in our time learn more about nature conservation and anti-littering before embarking on future trips.