Home » HABITAT » Mountains » Photographed by all
Back to Category Overview
Total images in all categories: 12,068
Total number of hits on all images: 7,363,056 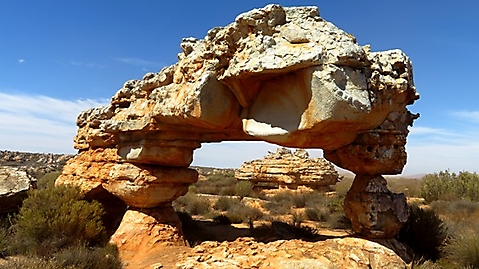 So many rocks are beautiful and admired for a brief moment, yet few are individually remembered. Rocky places have too many to offer and the world is so full of rocks, big and small, remembered fondly and otherwise that they blur on the day and over the rocky roads of life.

Among the few remembered ones, those that tower, are suspended on small supports or balanced in ways that appear to defy gravity, stand a good chance. Colour, shape and size of the above-ground parts contribute to making the eye linger and the mind register.

Many people have a favourite rock somewhere, sometimes leaving a yearning in the heart when the realisation hits that it will not be seen again. A whole nation or many nations may know about and revere a special rock like the Blarney Stone, the venerated Black Stone, Uluru, the Plymouth Rock and more. In Namibia there was the sandstone Mugorob or Finger of God near Asab until 1988, and still standing is the Vingerklip west of Outjo.

Such rocks acquire their status for the individual because of their stability. Like all rocks they don’t move about, are always there in welcoming all comers when much-visited spots are reached again.

The Magaliesberg has a Halfway Rock, a Venus Rock, a Kingklip and a Pavilion Rock that very few people know about. These same rocks may acquire and lose more names and connotations for other people at other times and orientations. Rocks erode slower than people are replaced.

Those that have visited Kagga Kamma may have stopped here and taken the ultimate photo yet one more time. Who were you with? When last did you have contact with them? Will you ever get here again?

The rock awaits all... impassively? Equally? Aloofly? Stonily? How about as all rocks do? The words also change faster than the rock. And then one day, far into the future…