Home » HABITAT » Mountains » Rock wriggling
Back to Category Overview
Total images in all categories: 11,544
Total number of hits on all images: 6,625,968 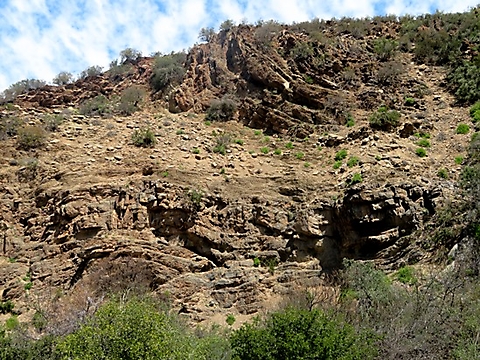 South African mountains display many shapes and sizes of rock folds caused aeons ago by varied processes affecting the geological upper strata. These curvaceous outcrops in picture are the tips of geological events long ago in the Little Karoo.

Most of the surface rock not under water has become covered in soil and vegetation, often only shallowly on mountain slopes and even less on steep slopes.

Rock folds remaining visible are often combinations of synclines or troughs and anticlines or domes. Such folds are called open when shallow, closed when deep. When the layers in the limbs on both sides of the plane that cuts through the centre of a fold are parallel, the fold plunging or rising to a fully closed or tight position, it is called isoclinal.

The forces shaping rocks into folds are beyond the natural life limits of biological entities. Rock formation changes are imperceptibly slow or violently fast. During slow change the covering vegetation lives comfortably on top of most of it.

Roots break rock slowly, entering into cracks and crevices in search of water and nutritious minerals. This action makes a life for a plant in the short term. In the long term it combines with erosion, forming soil from broken rock and the accumulating remains of untold plants and animals. Plant impact on rock is extremely superficial, only in the biosphere part of rock formations uppermost in the earth’s crust.

The violent forces of volcanic action and earthquake movement of touching tectonic plates are, however, huge matters of life-changing or life-ending impact to all that wriggle and breathe. Nothing lives on earth on a scale sufficient for holding its breath in anticipation of those events.

The only sensible action taken in response to big cataclysms culminating in mass extinction is for all survivors to do as the living always do: keep alive as best you can and procreate with all vigour. Several mass extinctions have taken away half or more of all living species out of the extant mix of the day, reducing numbers enormously.

Reconstruction of prehistorical events is not a science advanced to any levels of great accuracy and detail when it comes to covering the overall duration of life forms on earth. We know quite a bit of the times since humans invented writing and started to record events around seven thousand years ago, maybe a little more counting the oldest rock art.

The transition from hunter-gatherer Homo sapiens forefathers and mothers that lived in a tough form of Eden since at least 70 000 years ago happened between 10 000 and 12 000 years ago. This is when roaming no longer grabbed them as the way to go. Mothers wanted stable homes for child rearing or fathers had sore feet, so farm labouring types our ancestors became. Maybe there are still regrets over this decision, but it's too late now!

Whatever the truth, this is what the authorities of our day say. They weren’t there, but it is the wont of our restless brain species to figure such things out. And fight forever over versions of the unknown that have become truth in our eyes, whether the facts subsequently accumulate or not. Our communal lantern of learning casts only a little light into our past, although we are highly impressed with the rate at which its brightness is increasing in our time.

The lower estimate of the duration of continuous life of little somethings on earth is about 3,5 billion (i.e. thousand million) years. This number is more than half a billion years smaller than the upper estimate of that date.

Our scribblings about contemporary history, counting every pen stroke or equivalent, is much less than 10 000 years: The earth is old, but only a third as old as the universe. Our minds grasp such numbers as poorly as those telling us about the distances to stars and galaxies, or those concerning the size of atoms and their particles (Norman and Whitfield, 2006; Wikipedia).