Home » HABITAT » Mountains » Spring vegetation on sloped and flat land
Back to Category Overview
Total images in all categories: 11,544
Total number of hits on all images: 6,626,004 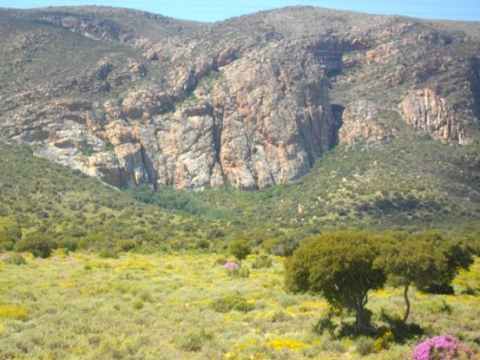 Rainwater runs off fast from steep mountain slopes. The chances of water penetrating into the ground increase as the slope reduces to flat and deep ground. The plant species mix on the mountain in picture differs much from what grows on the flat ground below. As a climber moves up a slope the plants encountered often give the observer opportunity for rest as new species appear with altitude increases.

Rocks at or close to the surface are common on the steepest inclines. They leave less opportunity for moisture to penetrate the ground, sometimes seeping into the bare crevices only, filling them quickly. And water makes all the difference to nutrient availability and soil acidity; thereby to vegetation composition. The effects may be dramatic as seen in the colour contrast here (helped by distance hiding details on the slopes at the back).

A clump of taller shrubs at the foot of the cliff, on the course normally followed by converging rainwater, can be seen below the rock face on the left. Deep soil collects in gaps among the rocks over long periods, deposited by run-off rainwater on slopes where topography allows, such as kloofs. This enables tall shrubs and trees to become established in small patches; plants absent from the land around with its generally prevailing features. Sudden vegetation changes may mark such spots where height, colour and foliage differ dramatically from surrounding terrain. Unusual micro-environmental conditions create pockets where unusual plants, even rare ones hide.