Home » HABITAT » Mountains » Protea cynaroides big on rock
Back to Category Overview
Total images in all categories: 11,544
Total number of hits on all images: 6,625,998 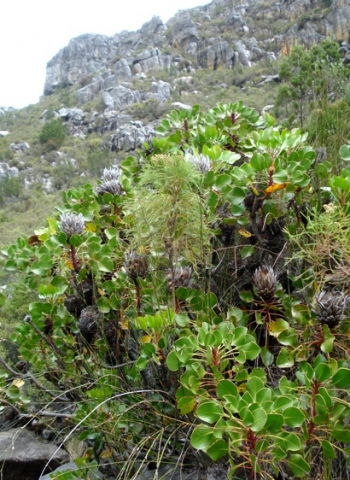 A sandstone slope in the Limietberg not far from Wellington may provide just the spot for a long life of frequent flourishing over many successful seasons to a Protea cynaroides plant. Unlike some Protea species that do not take to the good garden soil provided with such care, P. cynaroides will often perform in the garden. It is equally at home here on a mountain where nutrient availability is meagre from leaching by high rainfall.

Although heights of around 3 m do occur for this Protea, Plukenet’s 1705 description of the plant as “the African tree-artichoke from Table Mountain” did not become the everyday descriptor of the species.

P. cynaroides occurs in all of the following regions: Western Cape winter rainfall area, southern Cape where it rains all year round and Eastern Cape summer rainfall area. The plants (as well as the flowerheads) tend to reduce in size towards the eastern extreme of its distribution.

This Protea is known and valued for its ability to flower in every season, but plants will take time off for rest, at times looking like the one in the photo. Different variants of P. cynaroides regularly flower in their fixed blooming seasons; flowers of all the variants collectively do cover the calendar year (Rourke, 1980; Eliovson, 1983).