Home » TYPES » Grasses » Harpochloa falx
Back to Category Overview
Total images in all categories: 11,506
Total number of hits on all images: 6,494,259 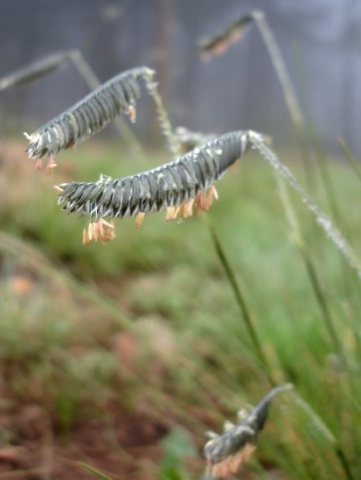 Grasses make good garden plants, not only for lawns. Harpochloa falx has both foliage and flowers to merit selection. Falx (Latin) means sickle, referring to the shape of the flower spike. The common name of caterpillar grass has another take on the appearance of this spike, sometimes referred to as a toothbrush flower.

Grasses are flowering plants, albeit small flowers that present rewards for those with attention to detail. This one, like many grass species grows great numbers of flowers bearing much pollen; they have to as their pollination is done by the wind. This is why grass contributes so much to hay fever!

H. falx flowers in the warm, rainy months, starting in spring and continuing until autumn. The distribution of the species lies in high (summer) rainfall grassland of the east of South Africa, preferring rocky slopes of undisturbed veld. The species is not considered to be threatened in its habitat early in the twenty first century (www.plantzafrica; http://redlist.sanbi.org).