Home » TYPES » Grasses » Heteropogon contortus
Back to Category Overview
Total images in all categories: 11,442
Total number of hits on all images: 6,209,862 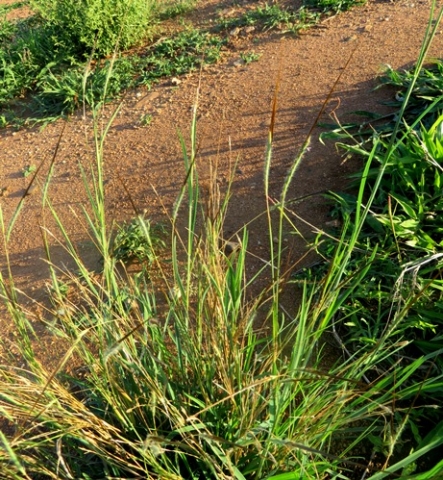 Its inflorescences are racemes becoming 7 cm long, excluding the dark, thin awns at the tips. The spikelets in the racemes are paired, one sessile, the other stalked. The awns of several inflorescences grown from a big tuft will become entangled with each other in a conspicuous way.

Flowering happens from spring to autumn, depending on the region within the overall distribution.

The species is found throughout the eastern parts of South Africa, as well as along the south coast of the Western Cape including the Little Karoo and to the north in southern Africa.

The habitat is grassland and stony slopes. The species is not considered to be threatened in its habitat early in the twenty first century (Vlok and Schutte-Vlok, 2010; Van Wyk and Malan, 1997; Van Oudtshoorn, et al, 1991; Lowrey and Wright, 1987; http://redlist.sanbi.org).