Home » GENERA G-H » Grewia » Grewia villosa flower
Back to Category Overview
Total images in all categories: 10,355
Total number of hits on all images: 5,061,678 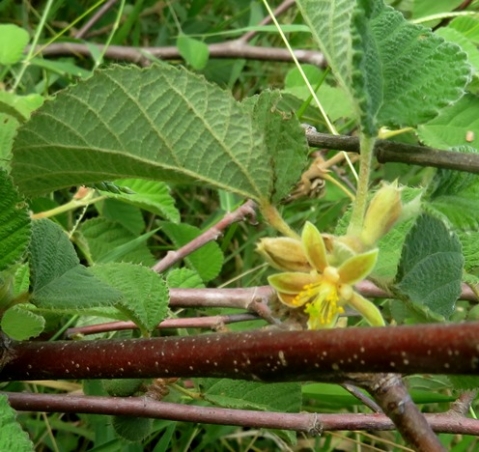 Petals play second fiddle in Grewia villosa flowers. They are short, pale and recurving obscurely between the bases of the five straight, acutely pointed sepals that form the conspicuous star-shape around the flower centre.

Closed sepals on the buds in picture appear soft and velvety on the outside, beige-brown in colour, not as pale and creamy as their inside surfaces. Grewia flowers generally have shorter petals than sepals.

Some may find the cluster of yellow stamens standing nearly erect in the flower centre to be the prime attraction of this flower. This would relegate the petals to third place in the attractiveness stakes: the viola instead of the second fiddle.

White lenticels are sparsely scattered along the surface of the older brownish stem in picture, not visible on all the smaller stems present in the photo (Coates Palgrave, 2002; Schmidt, et al, 2002; iNaturalist).