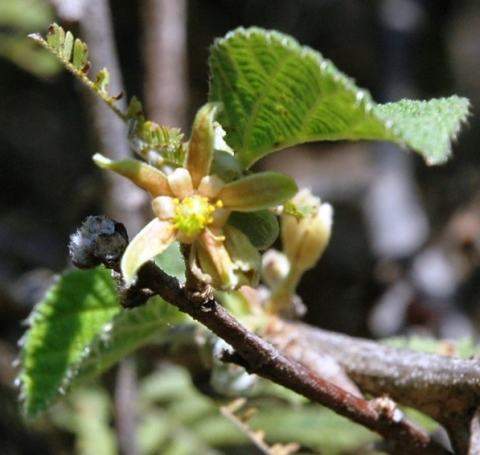 Grewia villosa, the mallow raisin or in Afrikaans the malvarosyntjie, is a shrub or small tree, sometimes deciduous (SA Tree List No. 463.3).

The short petal tips curve back, gripping the flower base through the gaps between the star-shaped spread of the sepals. Both petals and sepals are pale beige and velvety on the inside. The stamens spread, their yellow anthers topping straight white filaments.

The shrubs grow in bushveld, often in sandy soil or on rocky outcrops in the north-eastern parts of South Africa. This one was seen at Burgersfort. Across the border it is found in Namibia, Botswana and through tropical Africa to Ethiopia and Sudan, where the fruits are eaten. The plant is also recorded in Israel at the Ein Gedi oasis and in India. The species is not considered to be threatened in its habitat early in the twenty first century (Coates Palgrave, 2002; Wikipedia; http://redlist.sanbi.org).