Home » GENERA G » Grewia » Grewia robusta stamens after rain
Back to Category Overview
Total images in all categories: 12,078
Total number of hits on all images: 7,371,483 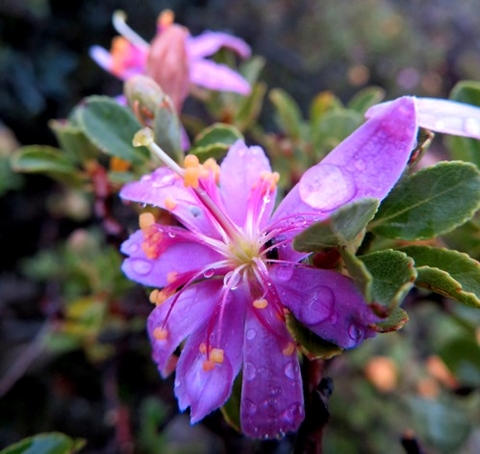 When rain plays havoc with a celebrity’s hair because the umbrella was forgotten at home, there may be repercussions for the memory challenged acolyte.

A Grewia robusta flower in the Little Karoo does not always complete its floral cycle before the downpour arrives. The central cluster of stamens will be dishevelled for a time. But nobody has to jump or lose a job as rain is so welcome in these parts.

It is known that the pollen count in the air often increases from rain, the grains dividing, but that relates to wind pollination. Insects will be less active and effective during a deluge and ripe pollen may be washed from anthers or rendered less viable.

Producing many flowers with much pollen is, like shrub longevity, a valuable feature of species survival. For biological variables involve the imprecision of overproduction for combating natural obstacles statistically. There is safety in numbers!

The return of sunshine soon heralds the arrival of pollinators for dealing with supplies still available on the flowers, although petals that had been open before may be damaged now. Nectar dilution and pollen degradation (or loss) can, however, result from bad weather and reduce the number of fruits to follow.

The bad years resulting in fewer successful plants, flowers and fruits may still yield a reduced crop, contributing to the safeguarding of the species. The will to live should not be underestimated in any living entity. That singular will manifests itself in numerous ways throughout the biological world, depending on the species.

This fact is demonstrated by the harsh measures people have to resort to in order to eradicate any living entity it chooses to condemn as undesirable.

Life itself does this differently: It allows the survival of the fittest to do its work as a continuous process, for suboptimisation like that which people prefer may reduce the chances of life itself surviving longest in some form, irrespective of species.

Life, loved by people, loves the continuation of the fittest life forms in the conditions that prevail more than it loves people. Life is as blind as justice. That is the nature of the evolutionary process that we form part of, as long as we are here (Vlok and Schutte-Vlok, 2015; Coates Palgrave, 2002; Van Wyk and Van Wyk, 1997).