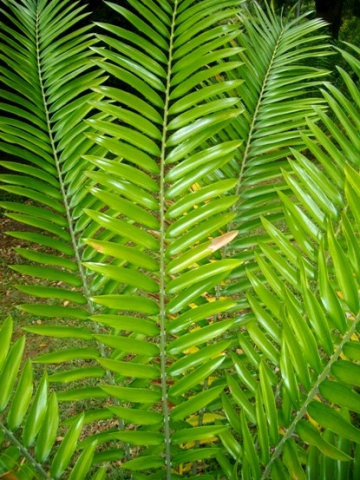 Encephalartos gratus, the Mulanje cycad, grows a stem of 2,5 m to 4 m. It usually grows solitary, although clumps may be formed.

The usually straight leaves become slightly longer than 2 m. The leaves have long petioles and the lowest leaflets are reduced to prickles. The mostly straight leaflets have several spines along their margins and sometimes a slight curve near the tip. Leaflet surfaces in picture are bright green and shiny.

Single or paired, thick orange (female) or multiple dark brown (male) cones that are long and thin, are produced.

The distribution is limited to (reducing) parts of the Zambesia province of Mozambique and Malawi’s Mulanje district where it grows in deciduous forest on steep slopes, in rocky ravines near streams and in savanna.

The species is considered to be vulnerable in habitat early in the twenty first century due to marked reduction of its population by agricultural activities, especially tea plantations. The plant is adapted to periodic fires.

The Latin word gratus means pleasing or welcome. This fast growing plant has been known to the botanical world since its discovery in 1899 in Malawi. The young plant in the photo was seen in Kirstenbosch in March (www.palmbeachpalmcycadsociety.com; http://www.iucnredlist.org; http://www.cycadpalm.com).