Home » GENERA D-F » Encephalartos » Encephalartos friderici-guilielmi
Back to Category Overview
Total images in all categories: 11,036
Total number of hits on all images: 5,686,056 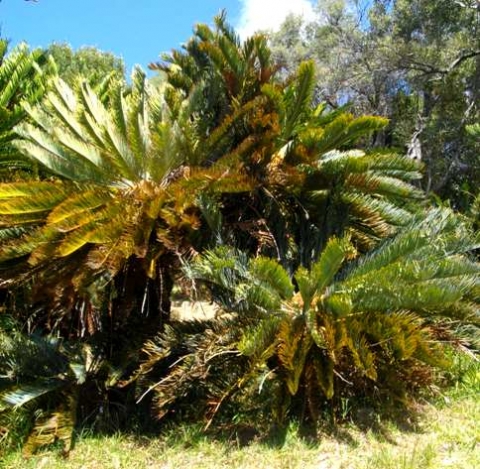 Encephalartos friderici-guilielmi, the white-haired cycad, grows stout stems up to 60 cm thick and 4 m tall (SA Tree List No. 4). The plant, a strong grower, may develop multiple stems from suckering; up to six of them may be seen clumped together. Some of the tall ones eventually may keel over gradually, continuing to grow even while flat on the ground.

The plant also grows multiple fruit and pollen cones, densely woolly and pale yellow in colour. The narrower male cones appear in clusters of up to twelve, the broader female ones up to about half that number. This is the Encephalartos species that grows the largest number of cones. The seeds released from ripe cones are yellow to orange.

The species distribution is Eastern Cape in the Cathcart, Queenstown and Kokstad region. It grows along karoid mountain slopes among rocks in open grassland where it is adapted to survive summer grass fires and winter frost and snow.

The status of the species is considered to be near threatened in its habitat early in the twenty first century. Its population has been steadily decreasing due to collection by gardeners and traditional healers or their suppliers.