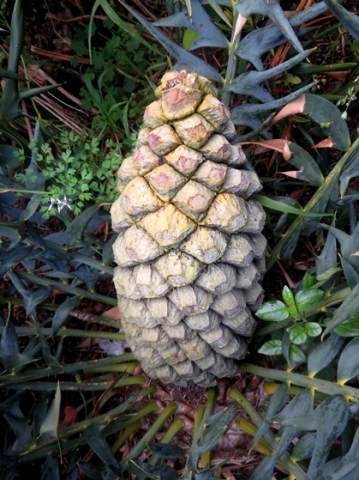 The female cone of Encephalartos horridus is oval, wider than the nearly cylindrical male one that narrows at both ends and is bluer in colour. The female cone may be 40 cm long and up to 20 cm wide in its centre. The male cone is similar in length but only 12 cm in diameter.

The gender of Encephalartos plants cannot be determined by sight other than from cones when they are present. E. horridus grows only a single cone per plant at one time, true for both male and female plants.

The woody scales arranged in numerous spiralling rows (as on all cycad cones), are flat-topped and bulging above their angular seams. Some of those in the photo are nearly rhombic in seam outline while the tips are slightly down-curved. The scales in picture are whitish grey with a little brown among the upper ones that will ripen first. This brown colouring may be or become stronger on E. horridus cones.

The seeds grown under the scales in the female cones are pale red to carmine. Pollination of this and other cycad plants is done by insects, while birds, baboons and monkeys disperse the seeds when eating the fleshy outer parts. The toxic seed inner part is discarded, allowing it to germinate where dropped, if conditions permit (Hugo, 2014; Wikipedia; http://pza.sanbi.org).