Home » GENERA D-F » Encephalartos » Encephalartos horridus
Back to Category Overview
Total images in all categories: 11,036
Total number of hits on all images: 5,686,028 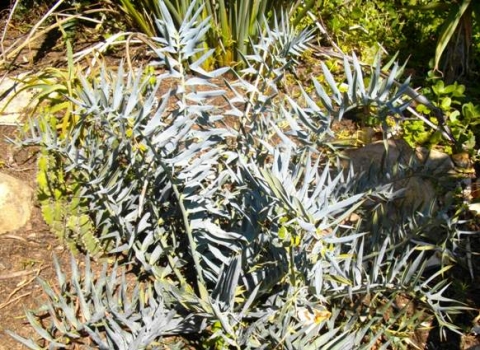 Encephalartos horridus, the Eastern Cape blue cycad, is a small species that occurs in two forms, distinguished only by the one being even smaller than the other in leaf and stem length. Plants of 1 m may still be found in the Eastern Cape habitat around Port Elizabeth and Uitenhage, in spite of much harvesting in the past by plant collectors.

The stem itself may grow to 1 m in length, but a big part of it is embedded in the ground. On a branched specimen (the plant grows up to eight stems), the tangled foliage may hide the characteristic Encephalartos feature of a stem tip rosette from the onlooker.

In nature the plant grows in deep loamy soil, on rocky slopes and ridges among Karoo scrub, also where the soil is sour. The winters are mild in the habitat of the Eastern Cape blue cycad, the rainfall moderate. This hardy plant should grow slowly but easily in hot, frost free climates (www.plantzafrica.com).