Home » GENERA D-F » Encephalartos » Encephalartos ghellinckii
Back to Category Overview
Total images in all categories: 9,152
Total number of hits on all images: 4,087,406 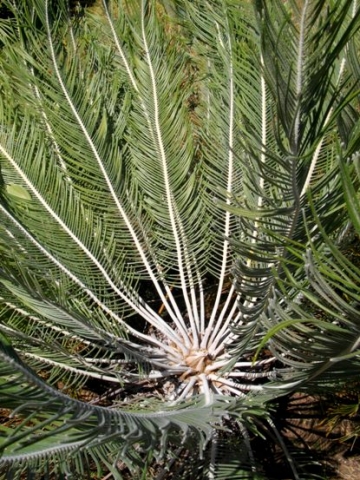 Encephalartos ghellinckii, the Drakensberg cycad, grows a stem to 3 m topped by a brown, woolly crown (SA Tree List No. 5). The leaves become 1 m long on long petioles, the leaf rachises conspicuously white in picture; they may also be yellow or green.

The narrowly linear leaflets resembling pine needles have tightly rolled under, entire margins. The leaflets are olive green to yellow green in colour. Leaflets become 14 cm long, 4 mm wide, the lowest ones not reduced to prickles.

These narrow leaflets resemble those of the Japanese Cycas revoluta, commonly found in South African gardens.

Two to five yellow to beige cones are grown by an E. ghellinckii plant, the female plants having thicker ones.

The species distribution is in the KwaZulu-Natal Drakensberg, from foothills to high altitudes. This distribution extends slightly into the Eastern Cape. The habitat is grassy slopes, on sandstone outcrops and near streambanks.

In its habitat the plant survives fire, frost and snow. It is considered vulnerable early in the twenty first century, more so the lower altitude form that overlaps much with human activities (Coates Palgrave, 2002; Hugo, 2014; Wikipedia; http://www.iucnredlist.org).