Home » GENERA D » Diospyros » Diospyros species flower
Back to Category Overview
Total images in all categories: 11,401
Total number of hits on all images: 6,175,267 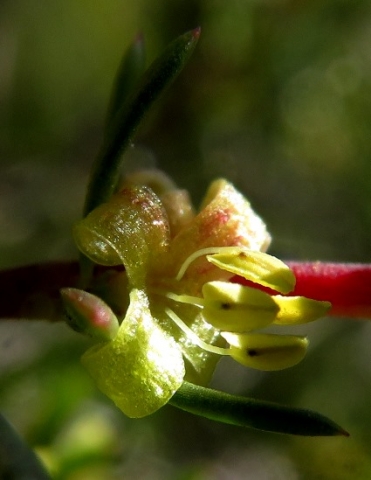 The flower of this unidentified Diospyros from Piketberg has the male component, the female one being uncertain. The bush is possibly a male plant, most Diospyros species being dioecious. The photo was taken in August.

The four corolla segments recurve strongly, their creamy surfaces rough and glistening, some parts translucent. The four stamens are erect, their anthers shield-shaped and facing inwards to where there is no enemy, apparently also no style. The filaments are about the same length as the anthers, attached to them at the back, about a third from the base (Coates Palgrave, 2002; Leistner, (Ed.), 2000; iNaturalist; Wikipedia; http://redlist.sanbi.org).