Home » GENERA D-F » Diospyros » A Diospyros maybe?
Back to Category Overview
Total images in all categories: 8,952
Total number of hits on all images: 3,966,746 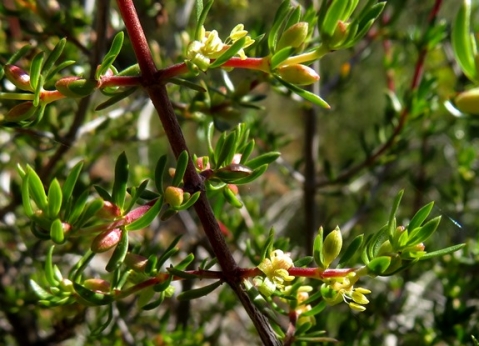 This plant photographed in August on the Piketberg Mountain is thought to be a Diospyros, although none of the species known in the Western Cape seems to fit the observed features.

Belonging to the Ebenaceae family, the Diospyros genus comprises about 475 species worldwide (some say 700). Africa has 94 of them, southern Africa 20. Asia has more, about 200 while Madagascar alone has 100 species.

Many of them bear edible fruit. Ranging from trees to shrubs, undershrubs and scandent species, some well-known Diospyros trees like ebony and persimmon are not South African, while the jackal-berry is (Coates Palgrave, 2002; Leistner, (Ed.), 2000; iNaturalist; Wikipedia; http://redlist.sanbi.org).