Home » GENERA D » Diospyros » Diospyros whyteana
Back to Category Overview
Total images in all categories: 11,401
Total number of hits on all images: 6,175,208 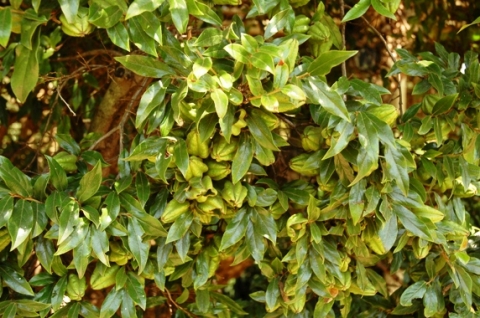 Diospyros whyteana, commonly the bladdernut or in Afrikaans swartbas (black bark), is a shrub or small tree reaching heights around 7 m (SA Tree List No. 611).

Both common names are apt in specific descriptive features: bladdernut refers to the inflated appearance of the fruit covers, while swartbas refers to the colour of the smooth, dark main stems of bigger trees, paler on young stems.

The alternate leaves are ovate-oblong to elliptic. The leaf tip and base taper, the base may also be lobed. The leaf margins are entire and wavy. The leaf surface is glossy dark green above, pale and dull green below. Young leaves are a coppery green for a while. The leaves are sparsely hairy, more so on the lower surface, while the margins are sometimes densely hairy. There are about six pairs of lateral veins on each leaf; fine net-veining is also visible, darker than the green surface. The venation is sunken above, raised below.

The species distribution is large, in a coastal strip from the Western Cape and Eastern Cape to KwaZulu-Natal and inland in the eastern Free State and the provinces north of the Vaal River. It also occurs in Lesotho, Swaziland, Zimbabwe and further in tropical Africa.

The habitat is riverine thicket, scrub forest, rocky patches, wooded outcrops and forest underbrush. The species is not considered to be threatened in its habitat early in the twenty first century (Coates Palgrave, 2002; Schmidt, et al, 2002; http://redlist.sanbi.org).