Home » GENERA D » Diospyros » Diospyros ramulosa
Back to Category Overview
Total images in all categories: 11,528
Total number of hits on all images: 6,614,396 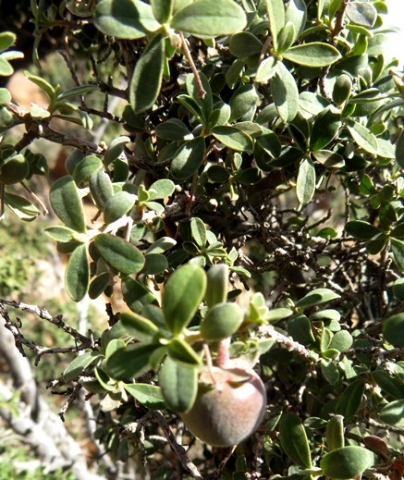 The rigid stems are ashy grey to brown and flaking in narrow, fibrous strips. Upper branchlets retain scars from dropped leaves, their surfaces pale grey to plum-coloured and covered in silvery downy hair.

The species is distributed widely. It is common in the Northern Cape, less so in the Western Cape apart from the far northwest and minimally in the Eastern Cape, seen only inland. It also occurs in the south of Namibia.

The habitat is rocky slopes and sandy flats in hot, arid areas. The species is not considered to be threatened in its habitat early in the twenty first century (Mannheimer and Curtis, (Eds.), 2009; Le Roux, et al, 2005; Coates Palgrave, 2002; iNaturalist; http://redlist.sanbi.org).