Home » GENERA P » Pleiospilos » Pleiospilos compactus
Back to Category Overview
Total images in all categories: 12,058
Total number of hits on all images: 7,353,554 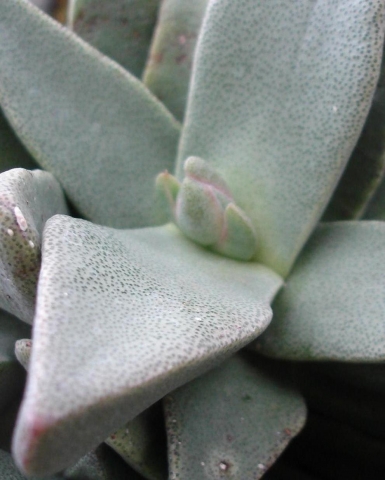 This Northern Cape plant bears yellow autumn or winter flowers and bluish, angled and mottled leaves that are thickly succulent.

Pleiospilos compactus has had at least four earlier botanical names that indicate variability among people, less so among plants. In fact, the list of Pleiospilos species in the 1980s looked remarkably different from what is accepted about the genus thirty five years later. All that has been caused by knowledge increases plus some changing of minds and turnover among committee members. Human knowledge is yet another living system that renews itself continually and more vigorously than happens to botanical or zoological species. The bigger the living system, the more surprising the novelties that may appear in parts of it.

The five subspecies of P. compactus shown in the List of Southern African Succulent Plants also indicate variability, this time more among plants and less among people. Although the people give the names and change their minds about that, they observe with increasing precision and attention to detail in both the scientific and lay communities, noticing myriads of features and attributes. There is very little in this world that will not fascinate some mind.

Classifying things according to observed details may result in more groupings than necessary due to intraspecies differences being mistaken for interspecies ones. The behaviour of those that form the groups as well as the diversification of the observed attributes among the subjects being studied play a role in all of this.

Five subspecies of P. compactus have been differentiated in our time. Coming generations of Pleiospilos plants will present Homo sapiens botanists with greater diversity if the environment stays healthy, less if humanity keeps on causing diversity loss.