Home » GENERA P » Pleiospilos » Pleiospilos
Back to Category Overview
Total images in all categories: 11,241
Total number of hits on all images: 5,956,985 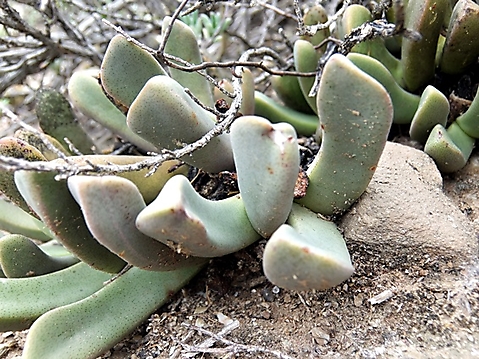 Pleiospilos is a genus of dwarf, perennial succulents in the Aizoaceae or mesemb family. The compact plants are sometimes unbranched. There are up to four pairs of leaves on each small stem.

The leaf-pairs are equal, opposite and joined at the base. The firm to swollen leaves are thickly succulent, broad and flat above with rounded backs and blunt tips. The surfaces are grey-green or brownish and stone-like, often translucently dotted and covered in a waxy layer that sometimes flakes.

The flowers grow short-stalked or sessile, solitary or in groups of three from stem-tips between the upper leaves. Bracts are present. There are from four to eight sepals, usually five or six that form a short tube to above the ovary that is flat-topped with a conical centre.

Many narrowly linear petals grow in a whorl around the flower centre, opening in the afternoon. They are yellow to coppery orange, rarely white or pink. Flower diameter of the usually large flowers is up to 8 cm.

Dark green nectar glands form a ring in the flower base around the nine to fifteen thread-like stigmas, the number of the locules in the fruit capsule.

Flowering happens in autumn or winter.

The fruits have large valve wings that taper to their tips, as well as covering membranes and large closing bodies. The dark brown seeds are ovoid in shape.

There are four Pleiospilos species, all South African endemics, growing in the Western, the Eastern and the Northern Cape, maybe also in the Free State but mainly in the Little Karoo. The plants grow on stony shale or sandstone flats and slopes among karoid vegetation.

These plants are popular among succulent collectors, but greenhouse conditions have to be provided in many places where people develop the urge to grow them.